We’re not going to beat around the bush.

Curvy bellies, boobs and booties may bring all the boys to the yard, but they can also make yoga more than a little challenging.

We’re used to seeing pictures of yoga starring predominantly Caucasian, size 8 females (usually in their 20s) bending themselves into pretzels, so it’s only natural that those not fitting the yoga ‘mould’ might feel a little intimidated by the practice.

PJ Wells, founder of Stretch Yoga Brisbane City has the adamant belief that yoga is for EVERY BODY – young and old, big and small, perfectly chiseled or a little more squidgy – which is exactly why she decided to start running Curvy Yoga out of her Holland Park studio on Brisbane’s Southside.

Stretch’s Curvy Yoga offering is a 6 Week Course for gorgeous abundant bodied yoginis and handsome yogis (or just regular peeps) to come and move their bodies in ways that feel good. With a focus on body acceptance and working ‘with what yo’mama gave you’, Stretch’s course is designed utilising props and adjusted sequences to show students how they can make any yoga pose work for their body. The premise is simple, by empowering plus sized students to adjust any yoga pose to suit their body and needs, hopefully a regular yoga practice is born and a healthier body mind and spirit is on its way!

Wells comes from a background in Nutrition and feels passionately about the concept – “We live in a society where modern science has drawn a blank about how to help us lose weight and keep it off. We’re getting larger as a society and more sedentary, and to me yoga seems like a large piece of the puzzle for so many people. Rather than focusing on how we look, yoga helps us to draw inwards and think about how we feel – that’s the stuff that really matters”.

Originally championed in the US by plus sized teachers including Dianne Bondy and Jessamyn Stanley (who both have tens of thousands of Instagram followers) Curvy Yoga is a movement that seems to be much needed by the Australian population. According to the AIHW as of 2014 over 63% of Australian adults were thought to be overweight or obese, and 25% of Australian children, with predictions that these numbers will rise over coming years.

For those who have never stepped foot in a yoga class before, Wells stresses that yoga is so much more than just fancy poses – “With its origin in India thousands of years ago, yoga is more than just an exercise and in fact is an incredible spiritual practice incorporating meditation, breath work and a way of seeing the world as being completely interconnected”. She thinks that this is where the magic happens – “In yoga we work on the inside. We deal with our baggage and learn to stop reacting to what life throws at us – it’s amazing how simply learning to breathe can transform in your life”.

When the first round of Curvy Yoga sold out almost instantly Wells decided to add more rounds. For those local to Brisbane, there is now an opportunity to book into Stretch’s newest intake from October 31st (Saturday’s 10:45am – 11;45am, $110) and there will certainly be more offerings in the new year. To book, jump on the Stretch Yoga website   (www.stretchyoga.com.au) or give them a call on 07 3157 3100. 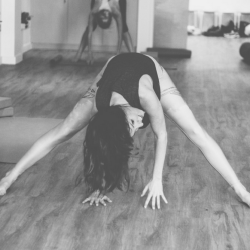 PJ Wells
PJ founded Stretch Yoga in Brisbane’s CBD in May 2014, and recently opened her second studio on Brisbane’s Southside in Holland Park in September 2015. She is a registered yoga teacher with a background in Nutrition and Dietetics and loves standing on her head and drinking wine. She has written for doyouyoga.com, Elephant Journal and Yogi